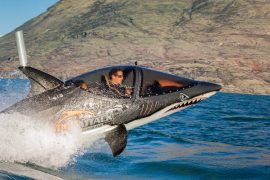 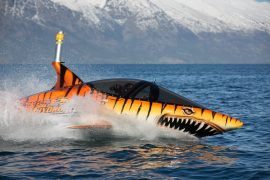 The Seabreacher X is the most advanced submersible watercraft to come from Innespace Productions in Redding, California.
The brainchild of New Zealand’s very own Rob Innes and USA’s Dan Piazza, the Seabreacher brings nature to machine and the results are mind blowing. Powered by a 260 hp supercharged engine the X model is currently the highest performing Seabreacher available from Innespace. Other models include a barrel-rolling Dolphin (the Z model) and a Killer Whale ( the Y model).
All this power enables the vessel to reach a top speed of up to 80 kph on the surface and 40 kph below. When you breach the lake’s surface during these high speed dives you can launch the entire 18 feet (six metre) length of the craft out of the water.
The new fully vectored thrust system mimics the tail articulation of real aquatic animals like the shark.

Hydro Attack is also the official distributor for Seabreacher in New Zealand and Australia. Whether you want to experience the thrill of the ride as a passenger or if you’re interested in buying your very own custom-built Seabreacher watercraft we here at Hydro Attack can cater for your every need.